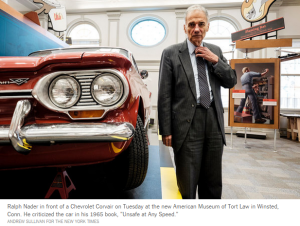 In his 1965 book "Unsafe at Any Speed," Ralph Nader railed against the structural flaws of the Chevrolet Corvair. Last month he posed beside it at the opening of the American Museum of Tort Law in Winsted, Connecticut. Some of the most famous tort (laws regarding negligence and liability) cases are featured at the museum, including the Dalkon Shield IUD, the Ford Pinto, and McDonald's coffee. Nader, the founder of the museum and pioneer of consumer rights, is 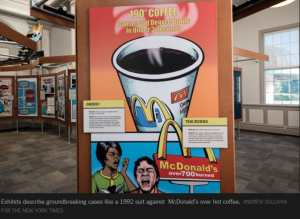 considering having students re-enact cases in a mock courtroom and stream them to high schools. While some are calling for tort law reform, Nader remains vigilant in exposing public deception at the hands of corporations. “Tort law is being run into the ground, maligned, caricatured and slandered because it’s effective,” said Mr. Nader.