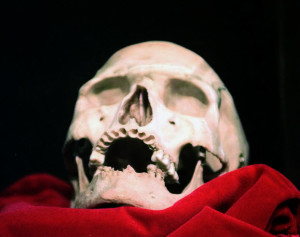 Although not always enforceable, you can put pretty much anything into your last will and testament--and these people did. Here are 5 off-the-wall last requests.

Jeremy Bentham died in 1832, and upon his direction his head and skeleton were preserved and dressed in a suit. His body has been on display at University College in London since 1850, and while Bentham's original request was to mummify his actual head, a wax one was made due to deterioration and the real one was locked away because students kept stealing it.

Solomon Sanborn, was a hatmaker and patriot from Boston, directed that his skin be made into two drums that would be beat to the tune of "Yankee Doodle" every June 17th on Bunker Hill. The rest of his body was to be composted and used as fertilizer for an American Elm.

Dorothea Edwards passed away at the age of 80, leaving her state-of-the-art pacemaker. Knowing that human-to-human pacemaker donations are against the law, Edwards, a professor, left hers to the University of Georgia School of Veterinary Medicine. The recipient became a 9-year-old German Shepherd named Sunshine, who, up until then, had had a pretty rough life.

Luis Carlos de Noronha Cabral da Camara was a Portuguese aristocrat with no heirs or family, and few (if any) friends. When he wrote his will, he picked 70 random names out of the phone book to divide his fortune between. "I thought it was some kind of cruel joke," a 70-year-old recipient relayed when she inherited several thousand Euros of Luis Carlos's fortune in 2007. "I'd never heard of the man."

André Tchaíkowsky, a Polish pianist, died of cancer in 1982. In his will, he requested that his skull be preserved and used as that of Yorick in Hamlet. Actor David Tennant said that he has used Tchaíkowsky’s skull in 22 performances of Hamlet at Stratford on Avon.