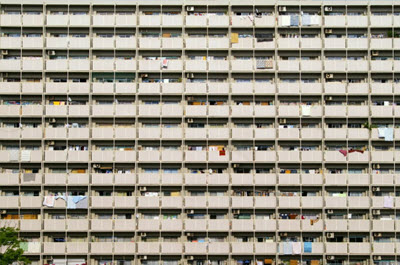 In the 1960s, families were lining up to live in danchi--huge government-built public housing that introduced the concept of communities focused on the nuclear family rather than traditional multi-generational homes. 50 years ago, tenants had to prove income of 5.5x their rent, and still may have been rejected due to overwhelming demand. These coveted communities were enormous--one in the city of Tokiwadaira was once served by two train stations to accommodate the occupants of 4,800 apartments who commuted to Tokyo each day.

Today, these once-bustling buildings are homes to lonely deaths. Friends and relatives of aging tenants have died, moved away, or become estranged, and because of Japan's focus on economic growth, the 60s marked a time of declining births. Now these mega apartment buildings house elderly tenants who go weeks, months, even years without visitors. The discovery of a 69-year-old man who had been dead in his apartment for three years drew national attention, and since then the plight of danchi dwellers has become a well-covered subject, with one magazine estimating 4,000 lonely deaths a week. An industry has now formed to clean out apartments of people who have died in their homes, many going unnoticed until neighbors complain of the smell. Oftentimes, with no heirs to collect their belongings, the contents of their apartments and lifetime memorabilia are incinerated.

Residents have formed neighborhood groups to keep a watch on each other, yet monthly luncheons and volunteer teams on high alert for apartments that show no signs of life are hardly a replacement for the network of friends and family this generation lacks. "I've been lonely for 25 years," remarked one tenant, 91-year old Mrs. Ito. Photos from the 60s paint a vibrant picture of the pulsing communities, which stand in sharp contrast to the now silent and abandoned parks and playgrounds.

Yet despite the risk of lonely deaths these people face, many are more concerned about how their dead will be cared for when they pass. They worry about who will maintain the grave sites of their loved ones, even though it is practically a certainty nobody will maintain theirs.