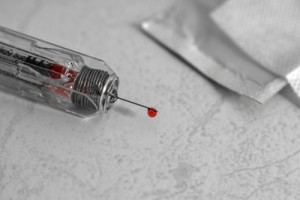 You may think this is a Halloween hoax. Think again. Ambrosia is a Monterey, California startup company that is selling plasma transfusions harvested from teenagers at $8,000 a pop. A 2014 Harvard University study that demonstrated young blood renews old mice seems to have spearheaded the latest in what has become, especially among the ultra rich, another anti-aging obsession.

The startup, headed by 32-year-old Stanford-trained doctor Jesse Karmazin, is calling the program a study, although this has drawn derision from the scientific community since the lack of control group and staggering price for participation pretty much negate the possibility of a random sampling.

Still, Karmazin claims positive results, including a dip in antigens and proteins involved in cancer and Alzheimer's disease, as well as improved sleep. Feeling vampiric? You can join the waiting list at www.ambrosiaplasma.com.