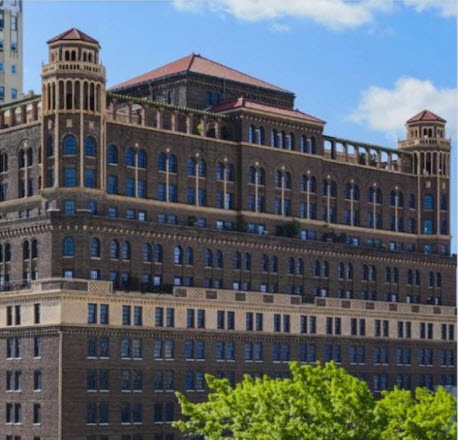 Over the past 40 years, the stately 21 Clark Street, also known as Towers, served as residences for roughly 1,000 Jehovah's Witnesses. Now, the Brooklyn Heights landmark will become senior living, which should be a relatively simple conversion as the former hotel-turned apartment building has been immaculately maintained.

Originally built in the 1920s, the Leverich Towers Hotel was home to the highest paid Brooklyn Dodgers during baseball season, and President Truman even spoke there. In 1975, the Jehovah's Witness organization purchased the building for $1.992 million, and just last week sold it for $200 million. (That's an appreciation of more than 10,000%.) The buyers, Kayne Anderson Real Estate Advisors, will partner with Watermark Retirement Communities and rebrand the building as The Watermark at Brooklyn Heights.

The transition of the 16-story, 314,000 square foot building continues the trend we're seeing toward luxury urban senior housing--and future residents are bound to be wooed by the 20,000 square foot rooftop deck with the best views of the Manhattan skyline you can come by.