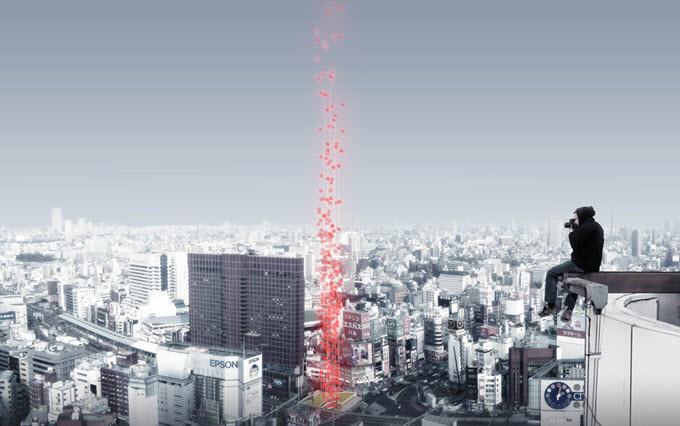 The rapid decrease of burial space in Tokyo sparked an architectural competition to design a vertical cemetery. Arch Out Loud, the research initiative that issued the challenge, fielded 460 proposals from 54 countries and 6 continents. Architects and designers were asked to incorporate Japan's cultural identity relating to death, as well as the relationship between life and death in the city. The winner? A tower of balloon coffins.

Each balloon contains the cremains of the deceased, and is attached to an optical fiber equipped with a countdown mechanism that slowly releases string until, eventually, the balloon flies off. The design is meant to symbolize the temporal nature of life.

It may also contribute to the temporal nature of the animal's life which it comes in counter with. Or the temporality of our electricity. As it turns out, balloons are a major environmental hazard. From marine to terrestrial to aviatory wildlife, animals have been found with balloons in their stomachs and attached strings that have caused entanglement and, often, death.

In addition, top known culprits for power outages are balloons and squirrels. Specifically mylar balloons, which, if they touch power lines, can spark an outage. In Los Angeles, 7% of electrical outages are attributed to balloons--a number that, according to the LA Daily News, can cost the economy 200,000 a minute.

It is unclear what the proposed material is for the virtual cemetery balloons, however even biodegradable latex balloons can take up to 4 years to decompose.

There's even a non-profit against releasing balloons, Balloons Blow. Their motto? Don't let them go.