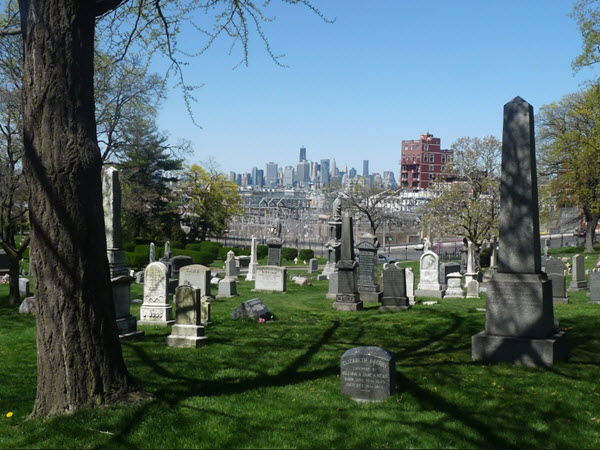 If you think competition is fierce to get into a cemetery in New York City, you'd be right. Considering we have a tough enough time finding space in this city while we're living, the oodles of dead from centuries past need a place to lay their heads too, and real estate is running low. Washington Cemetery in Brooklyn, for example, is sold out. “People come in [and say] ‘I’ll give you $30,000 if you give us a grave,’” said Manager Michael Ciamaga. “You could give us $1 million, we don’t have nothing to sell you.”

But surprisingly, there's still a fair amount of space in other locations. Over 300,000 people are buried at Woodlawn Cemetery in the Bronx, and there is still space for tens of thousands more.

Brooklyn's Green-Wood Cemetery is also still in sales mode, and they are taking a really interesting approach. Their location and history are attractive enough: the graveyard, designated a National Historic Landmark, covers 478 acres with views of Manhattan from its hilltop perch--that's more than half the size of Central Park. In fact, Green-Wood Cemetery was the first public park in Brooklyn and is said to have inspired the creation of Central Park and Prospect Park. But what piqued our interest was the twist they're taking on marketing--one that creates new revenue streams while exposing the property to a large number of prospective buyers.

Green-Wood Cemetery's website actually has an Events Calendar which includes film screenings, concerts in their catacombs, twilight tours, and “Death Cafes”–informal gatherings to discuss philosophical, political, and scientific ideas surrounding death. They even have a Spring Family Scavenger Hunt.

While the finality of death can feel scary, it's something all of us will have to face at one point or another. Green-Wood Cemetery is taking the creepiness out of graveyards and making them a place to gather and learn.